More, the Good, the Bad, and the Ugly!

“The climate crisis has not disappeared,” said Swedish activist Greta Thunberg. “It’s the opposite—it’s even more urgent now than it was before.”

Young people by the hundreds of thousands took to the streets across the globe on Friday to deliver a resounding message to world leaders: The climate crisis is getting worse, and only radical action will be enough to avert catastrophe and secure a just, sustainable future for all.

Why is life on Earth still taking second place to fossil fuel companies?

The human tragedy is that there is no connection between what we know and what we do. Almost everyone is now at least vaguely aware that we face the greatest catastrophe our species has ever confronted. Yet scarcely anyone alters their behaviour in response.

Have We Finally Broken the Climate?

Heat domes in Canada, flooding in Germany, droughts in Africa and Central Asia: This summer has seen some worrying weather. How closely is it tied to climate change? Scientists around the world are trying to find out.

A county on the northwest coast of Washington State has made a landmark decision to ban new fossil fuel development, reversing a trajectory that had it on course to become a gateway for oil, gas, and coal exports to Asia.

‘We Are in Deep, Deep Sh*t’: Climate Experts Shocked at Severity of Floods in Germany and Belgium

“This is your climate on fossil fuel.”

Climate scientists on Friday were stunned by the intensity of flooding in Germany and Belgium that killed at least 120 people and damaged tens of thousands of homes, with experts saying they did not expect such extreme weather to result from the human-caused climate crisis as rapidly as it has.

As fires propagate throughout the US west on the heels of record heatwaves, experts are warning that the region is caught in a vicious feedback cycle of extreme heat, drought and fire, all amplified by the climate crisis.

…  It’s cheaper for Amazon, and the companies leasing space in Amazon hubs, to simply destroy old inventory to make room for new items, rather than deal with the messy business of reselling, redistributing, or refurbishing them.

… Today, all of humanity is under attack, this time from an overheated planet – and too many newsrooms still are more inclined to cover today’s equivalent of dance competitions.

But whether Earth can stay within 1.5℃ warming involves two distinct questions, write veteran climate scientists… First, is it physically, technically and economically feasible. Second is whether governments will take sufficient action to reduce greenhouse gas emissions. This answer depends on the ambition of governments, and the effectiveness of campaigning by non-government organizations and others.

Climate scientists: concept of net zero is a dangerous trap

… a great idea, in principle. Unfortunately, in practice it helps perpetuate a belief in technological salvation and diminishes the sense of urgency surrounding the need to curb emissions now.

What next for councils who have declared a climate emergency?

Around three-quarters of local authorities in the UK have already declared a climate emergency. CAT’s Anna Bullen and Anthony Hurford look at how to move beyond declarations towards effective action.

The latest global status report on renewable power in cities shows that 2020 was a good year for the development of targets and policies at the municipal level, with more than 610 municipalities in 72 countries setting 100% renewable energy targets by year’s end.

The world’s 50 biggest economies devoted just 2.5% of their budgets in 2020 and only 18% of their pandemic spending to green recovery measures, according to a new analysis released this week by the University of Oxford and the United Nations Environment Programme (UNEP).

… but while new national climate commitments, or Nationally Determined Contributions (NDCs), roll out ahead of this year’s UN climate conference in Glasgow, “a more insidious problem is emerging,” Lewis writes. “Net-zero increasingly involves highly questionable carbon accounting. As a result, the new politics swirling around net-zero targets is rapidly becoming a confusing and dangerous mix of pragmatism, self-delusion, and weapons-grade greenwash.”

Thousands of women have joined protests by farmers on the outskirts of New Delhi to mark International Women’s Day, demanding the scrapping of new agricultural laws that open up the country’s vast farm sector to private buyers.

The tweet below and the next two stories are the same story. It’s all about Atlantic Meridional Overturning Circulation (AMOC) and the Gulf Stream. You need to know about this stuff. We are running out of time.

Atlantic Ocean circulation at weakest in a millennium, say scientists

The Atlantic Meridional Overturning Circulation (AMOC) sea currents are vital in transporting heat from the tropics to the Northern Hemisphere, but new research suggests climate change might knock the AMOC out of action much sooner than we anticipated.

Mark Carney: Climate crisis deaths ‘will be worse than Covid’

The world is heading for mortality rates equivalent to the Covid crisis every year by mid-century unless action is taken, according to Mark Carney.

Polar Vortex: How the Jet Stream and Climate Change Bring on Cold Snaps

It might seem counterintuitive, but global warming plays a role in blasts of bitter cold weather. The reason: It influences the jet stream. Here’s how.

Investors are increasingly placing their bets with renewable energy and abandoning oil and gas, the Institute for Energy Economics and Financial Analysis reports, in an analysis that shows capital markets “shifting decisively towards cleaner investments”.

Investors Are Backing Away From Fossils

As more movers and shakers begin to agree with climate advocates for financial as well as environmental reasons, a permanent shift within the energy industry seems to be taking shape.

Denmark Wants to Make It Illegal to Ignore Climate Change

BY AUDREY ENJOLI Denmark has passed an ambitious law that makes it illegal to not act on climate change. The country’s new law, called the Climate Act, aims to ensure that Denmark will reduce its carbon emissions by 70 percent in 2030 compared to 1990 levels. The law also aims to achieve net-zero emissions by 2050.

Sat Dec 19, 2020 – the Guardian- Blustery winter weather helped Great Britain’s windfarms set a record for clean power generation, which made up more than 40% of its electricity on Friday.

Our Stuff Weighs More Than All Living Things on the Planet

2020 was the year in which the weight of “human-made mass”—all the stuff we’ve built and accumulated—exceeded the weight of biomass on the planet.

bloomberg.com – – Denmark will stop offering new oil and gas licenses in the North Sea and will phase out production all together in 2050 as part of the country’s goal to become fossil free.

@GretaThunberg – – The real news here is that Denmark will apparently go on extracting fossil fuels for another 3 decades. To us children, this is not the “good news” that some people seem to think. We’re in a climate emergency. Act accordingly.

Tasmania declares itself 100 per cent powered by renewable electricity

The Tasmania government has declared that it has become the first Australian state, and one of just a handful of jurisdictions worldwide, to be powered entirely by renewable electricity.
Michael Mazengarb – 27 November 2020

FYI — Renew Economy is a great site to read about Clean Energy transition down under. You can also subscribe to their daily newsletter.

The Driven, EV news from Australia, features on the Renew Economy website and in every newsletter

“Age of the Jetsons”: Australian company unveils what it claims to be the world’s first electric air ambulance– Michael Mazengarb – 25 November 2020

The world’s biggest aluminum and textile producer has shuttered 3,400 MW of coal-fired generating capacity in China’s Shandong province, even as the country weighs the more than US$300 billion in stranded asset risk it could face if it doesn’t begin restricting construction of new coal plants.

The report expands on what that means by pointing to “dignified work, healthcare, education, housing, clean air and water, healthy food, and more.” In this new work, says Greenpeace, the world must “shift from an economy that is extractive and exploitative to one that regenerates and repairs.”

1% of people cause half of global aviation emissions – study

Airlines produced a billion tonnes of CO2 and benefited from a $100bn (£75bn) subsidy by not paying for the climate damage they caused, the researchers estimated. The analysis draws together data to give the clearest global picture of the impact of frequent fliers.

UK overseas territory Tristan da Cunha’s new marine protected area will be fourth largest sanctuary of its kind. A community of 250 people on one of the most remote inhabited islands on Earth has made a significant contribution to marine wildlife conservation by banning bottom-trawling fishing, deep-sea mining and other harmful activities from its waters. — The Guardian

‘This Is a Really, Really Big Deal’: Michigan Gov. Moves to Shut Down Line 5 Pipeline to Protect Great Lakes

“Enbridge has imposed on the people of Michigan an unacceptable risk of a catastrophic oil spill in the Great Lakes that could devastate our economy and way of life.”

Made from sugarcane and bamboo, it could revolutionize the disposable container industry. It’s nice to dream of a zero waste world, in which people always remember to take their reusable containers to stores that happily fill them. — There will be a need for single-use, disposable containers for a long time yet, whether it’s for hygiene reasons (hello, COVID-19) or on-the-go convenience.

Exclusive: Leaders are happy to set targets for decades ahead, but flinch when immediate action is needed, she says.

“The costs trajectory and the current costs of renewable energy…when generated domestically is getting cheaper than imported coal and imported gas,” said Sara Ahmed, energy finance analyst at the Institute for Energy Economics and Financial Analysis (IEEFA).

A growing movement calling for the “right to repair” is finding deep, cross-partisan support. By 2021, EU citizens should find it easier to get laptops, phones, and tablets fixed, courtesy of new right-to-repair rules that were announced this past spring as part of the continent’s plan for a more sustainable and competitive circular economy.

Maid of the Mist in Niagara Falls has launched North America’s first all-electric, zero-emissions tour boats. Earlier this month, the Maid of the Mist launched two electric catamarans into the gorge, the first of their kind in North America. The hulking double-deckers run on dual banks of lithium-ion batteries.

C40 Global Mayors’ Statement for a Green and Just Recovery 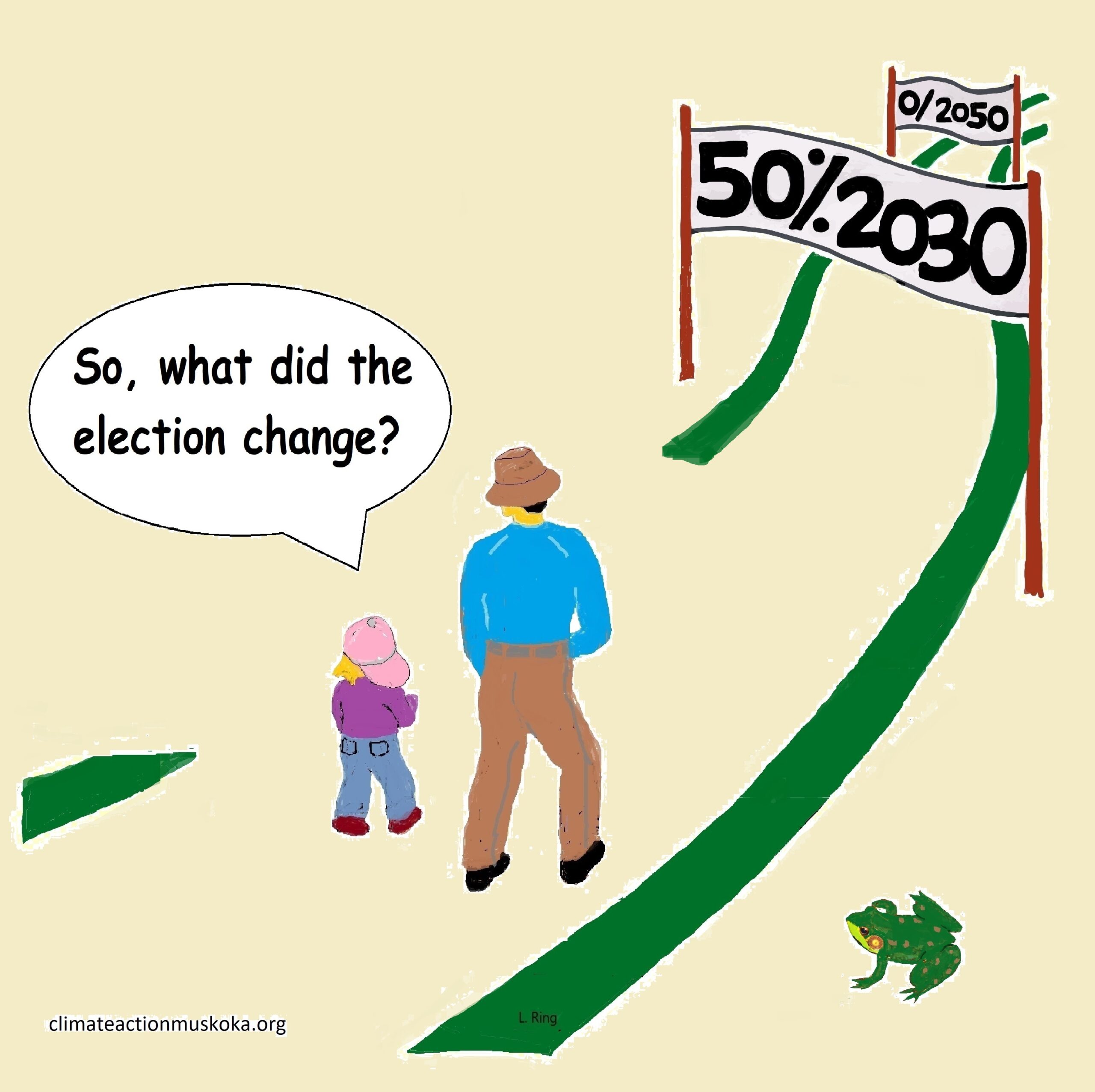